HLPS, along with Department of Environmental Conservation (DEC)  Relocates Osprey Nest at Lighthouse

Nest was discovered in vulnerable location, moved for bird’s current and future protection

In early May, an osprey nest was discovered on the entrance dock to the Huntington Lighthouse. Ospreys will often seek the highest location to construct a nest, but this pair settled on a lower – and very vulnerable – spot on the walkway leading up to the offshore lighthouse. According to the Department of Environmental Conservation (DEC), the pair are likely juveniles, and this was, perhaps, a starter nest. “This could be their first nest,” explained DEC wildlife biologist Chip Hamilton. Hamilton’s office was called when the nest was discovered, as lighthouse officials feared the location exposed the pair – and their potential offspring – to curious boaters and animal predators.

Once the DEC determined the nest should be moved, lighthouse officials moved quickly. Frank Scobbo, of Scobbo Contractors, donated time and resources to erect an 8-foot tall metal pole supporting a large wooden platform on the open water side of the lighthouse. Paul Kaiser, of Kaiser Marine, was also instrumental in getting the new home quickly built. Under the direction of the DEC, the pole and platform were drilled into granite boulders within sight of the old nest. 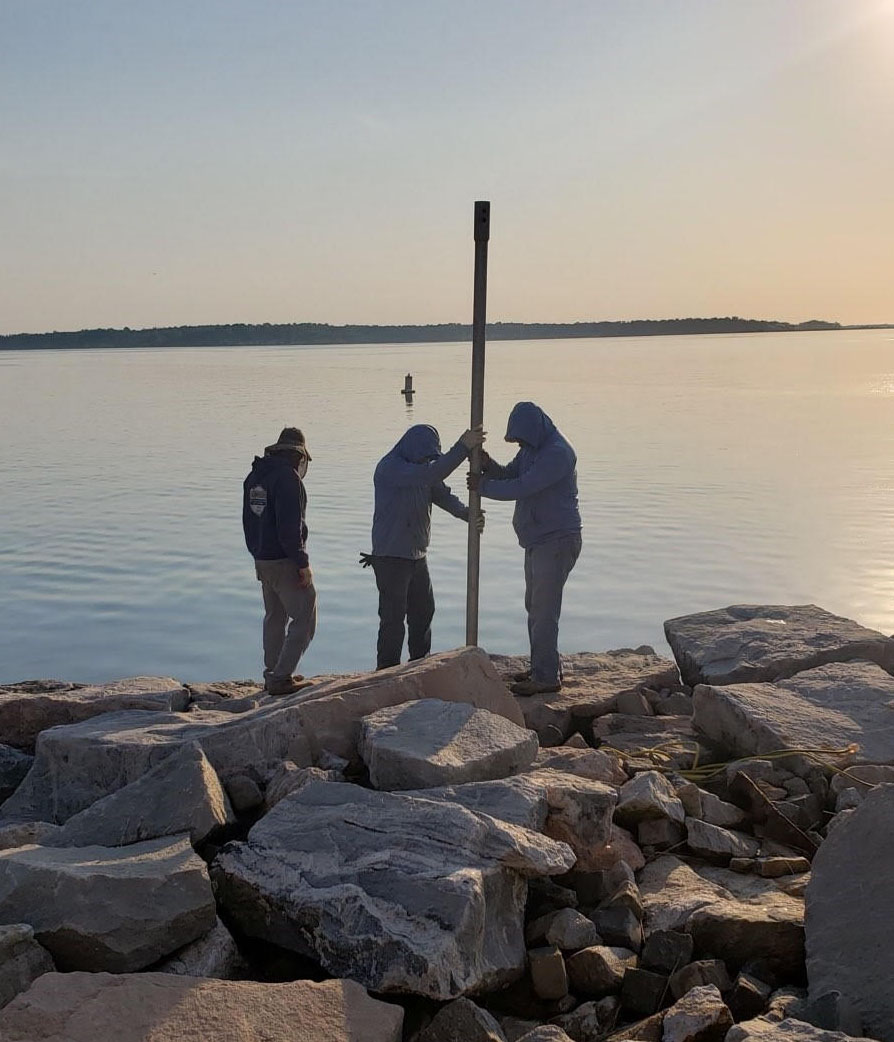 Osprey’s build their nests in approximately the same location every year, making it even more important to offer a safer alternative to the young couple. Once the new structure was approved, a plan was hatched to move the birds, and their one egg.

Lighthouse president Pam Setchell worked closely with the DEC throughout the entire process. “The safety of the nesting pair was our priority,” she said. “A plan came together quickly, thanks to the DEC and the generosity of Scobbo Construction and Kaiser Marine. They literally dropped everything to get the platform built, ensuring the successful relocation of the nest.”

On moving day, a small team including Hamilton and DEC associate Sean Wiedemann, made its way to the lighthouse. Under the watchful eye of the circling parents, Hamilton and Wiedemann scooped up the egg and deftly moved the sticks and twigs that make up an osprey nest. Using a ladder, the nest was reassembled and the egg carefully returned.  The entire process took less than 15 minutes.

“We’ve been monitoring the new nest from afar, and we are thrilled to report that the ospreys are in residence,” said Setchell. “This is certainly the exact, gratifying outcome we hoped for when we started this mission.” 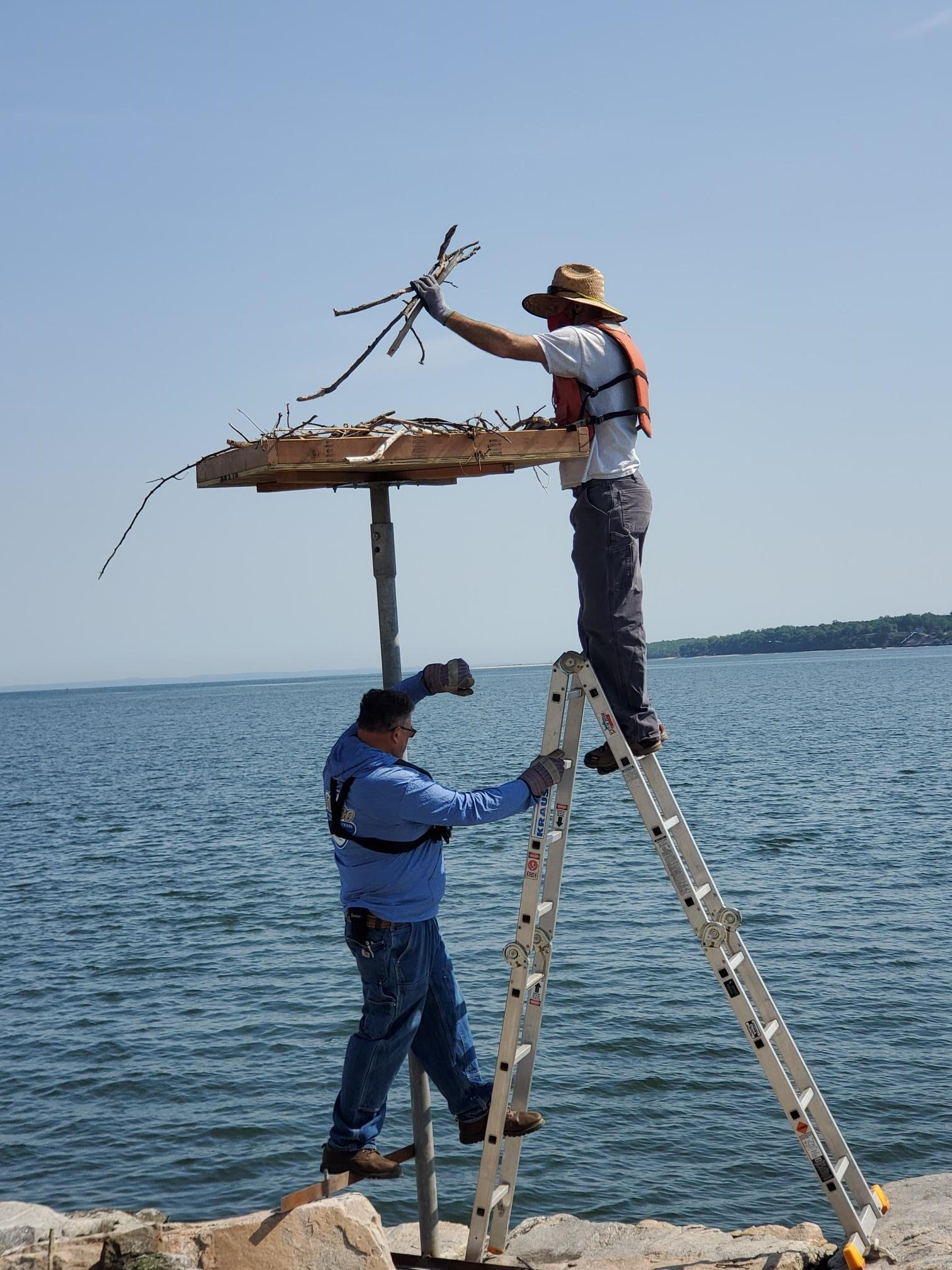 Osprey nests have become common sightings around Long Island’s marshy shorelines, a testament to the birds rebound from near extinction back in the 1960’s. Better protections, and the elimination of DDT as a pesticide have contributed to their success story. But ospreys are still protected under the Migratory Bird Treaty Act, and disturbing an active nest is a federal and state offense. Every March, ospreys make their way back to Long Island from winter destinations, and in April up to four eggs are laid and incubated. The summer months are spent rearing hatchlings, and the new family migrates south from Long Island, usually sometime in August.

It remains to be seen if the lighthouse’s newest residents will welcome a young chick this season. Officials caution the presence of just one egg isn’t a positive sign. “But we won’t know for sure for another week or so,” explained Hamilton.

Fortunately for fans of the lighthouse, summer tours and the venerable Lighthouse Music Festival have both been approved for the season. 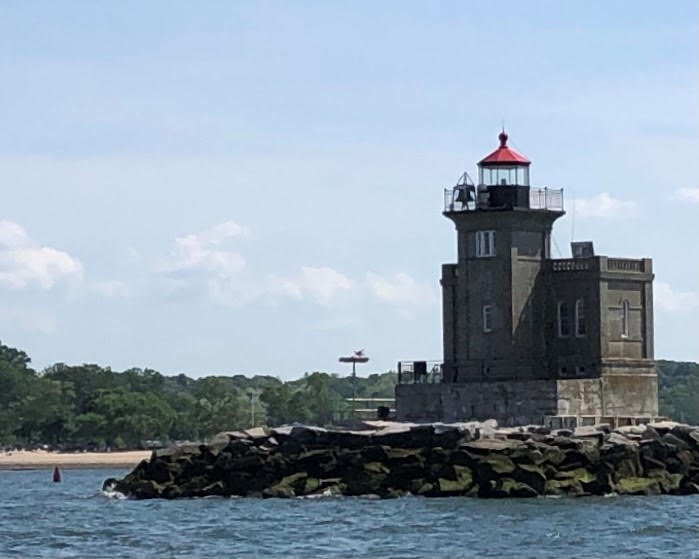